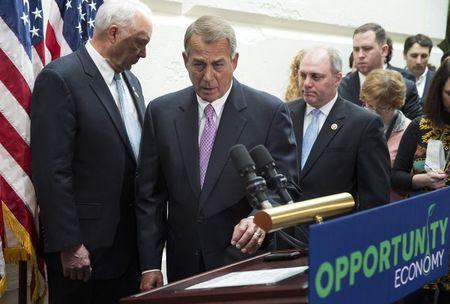 The Senate on Wednesday moved to avert a partial shutdown of the U.S. domestic security agency this weekend, voting to clear the way for a funding bill free of contentious immigration issues.

Hurdles remained, with conservative Republicans in the House of Representatives still opposed, and procedural negotiations threatening to delay final votes beyond a Friday funding deadline for the Department of Homeland Security.

The super-agency was set up after the Sept. 11, 2001, attacks to coordinate domestic efforts on combating security threats, such as those recently made by Somali-based Islamic militants against U.

A measure to fund the agency with $39.7 billion became the flashpoint in a fight by Republicans against Democratic President Barack Obama's recent executive order lifting the threat of deportation for millions of undocumented immigrants.

In a 98-2 vote on Wednesday, the Senate cleared the way to strip out the House's immigration provisions. Some of these would be voted on separately under the plan designed by Senate Republican Leader Mitch McConnell to end the deadlock.

The Senate's overwhelming support for McConnell's approach signaled to the House that there is strong bipartisan support for drama-free funding of Homeland Security. But McConnell was still negotiating to try to speed up the process.

"I will offer a clean substitute and work to expedite consideration of the bill as amended to get it back over to the House this week," McConnell said on the Senate floor.

Democrats had insisted all along on a "clean" Homeland Security bill, free of the immigration restrictions, and Obama had threatened to veto the House-passed measure.

But House Speaker John Boehner, under pressure from restive conservatives in his party to fight Obama on immigration, declined to say if he would put a clean bill to a House vote.

With the midnight Friday deadline approaching, Boehner told reporters he would make no decision on McConnell's plan until the Senate acts, adding: "We're in a wait-and-see mode."

Acceptance of the Senate plan would amount to capitulation and a loss of leverage on immigration, some House conservatives said, despite a federal judge's order in Texas last week to block the department from implementing Obama's orders.

Should funding run out, Homeland Security would be forced to furlough about 30,000 employees, or 15 percent of its workforce. Essential personnel, such as airport and border security agents, would stay on the job, but would not be paid until new funding is approved.

Homeland Security Secretary Jeh Johnson and some of his predecessors pleaded at a news conference for Congress to swiftly pass the funding bill.

"What I don’t think makes sense is to hold the entire set of operations of the Department of Homeland Security in abeyance as a hostage as the legislative branch starts to play a game of chicken with the president," said former Secretary Michael Chertoff, who served under Republican President George W. Bush.

A cut-off in funds also would suspend grants to states to support local counter-terrorism activities.