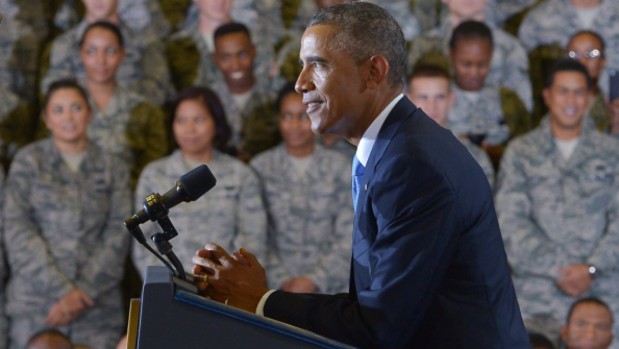 U.S. President Barack Obama will propose to Congress on Wednesday a new three-year authorization for the use of force against Islamic State with limits on U.S. combat troops' involvement, lawmakers and congressional aides said.

don't see Saudi Arabia suiting up their sons even though they were the ones who admonished President Obama for not bombing Syria. Yeah, I had no idea Syria was the 51st State. I don't see Saudi Arabia putting boots on the ground to deal with Assad or with the radical Islamists they have advocated and supported for decades now who are now knocking at their doors with unfriendly intent. They should have declared Whabbism a terrorist organization decades ago and gotten rid of those people who have used the oil money not to improve the lives of the people in the Middle East but to cause this sectarian viciousness resulting in the deaths of how many? And now we are supposed to put boots on the ground after our people have fought over there for 12 years? ISIS is a creation of the Arab world, somebody in the Arab world is funding them nicely probably from Saudi Arabia and a couple of other power hungry jokers over there so maybe we need to go after the funding and stop that.

Hard to buy arms and ammo and supplies without monies but then if we did that we would probably disclose too much complience from our Corporations and governments over the years with the nations who hide their support of terrorism behind their national facades. Somebody is funding ISIS and that should not be hard to discover so why haven't we dried up that well a long time ago?

The issue with Assad and Syria is the exact same problem we faced with Hussein and Iraq. Is it our obligation to guarantee that every person in every corner of the world be free from oppression by their own government? Our Country does not have the responsibility to see this done. Prior to all of the different uprisings (which were mainly Muslims objecting to Assad's semi-secular government and his refusal to impose total Sharia law), Assad was not abusing the Syrian people and, except for his occasional saber-rattling at Israel, was not making any trouble with the neighboring countries. It's maybe too late now, with Iran getting involved, to get all of the foreigners out of the conflict, but WE do not belong in any fight seeking to overthrow Assad.