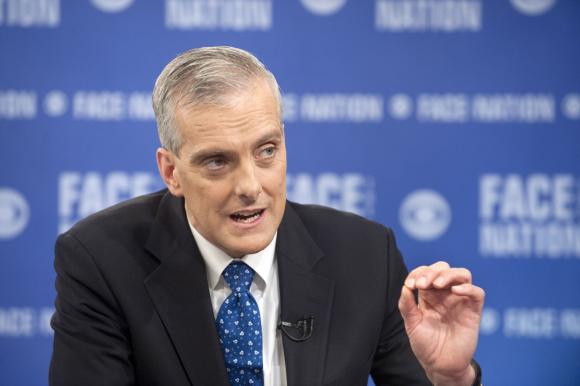 White House Chief of Staff Denis McDonough on Sunday said the Republican-led Congress should not sidestep the president's request to formally authorize military action against Islamic State forces, saying lawmakers must not "take a pass".

Until the U.S. And it's allies are prepared to use the same level of aggression it used during WWII to defeat Germany, ISIS will continue to thrive and grow.
Germany's military during WWII was 12 million strong. ISIS has what, 20 thousand?
How is it after the U.S. declared war on Germany it took but 3-1/2 years to end the war, yet the American people are being told that bringing down an Army (ISIS) that is 1/600th the size of Hitler's army is going to take just as long or longer.
In the 13-1/2 years since 9/11, the problems in the Middle East have only gotten worse.
We need to institute the military draft, make a formal declaration of war against any and all terrorist groups as well as the nation's that support them, and use what ever military might (including nuclear) that it takes to bring harmony to the Middle East (as well as other global hot spots), regardless as to how many civilians (Muslim, Christian, or Jewish) are killed in the process.

McDonough - there is a man sitting in the Oval Office this morning that ignored the will of the American people and broke our most precious principle in keeping check on the balance of powers. Mr. Obama usurped his role as president of the U.S., and did as he pleased. He should have been impeached on the grounds that he exceeded the scope of his office and failed to obtain Congressional approval of his voluntary act to use the military at will while war was never declared. That will has reared its ugly head more times than we care to count since 2008. Barack Obama has no interest in the Constitutional limits to his office just as his most recent predecessors had no interest in it. To attempt to persuade the public that he does is insulting to watch day after day.

The people have been ignored in all of this - and the people knew that these wars would not benefit us in any way while the expenditures accumulated and soared beyond all expectation, leaving the U.S. with massive indebtedness and seriously injured young men and women that returned home jobless.

Why on God's green Earth would a Chief of Staff ask the people to repeat that scenario over and over and over?

Not only do I feel strongly that Barack Obama ought to be impeached, I think you should step down immediately from your post.