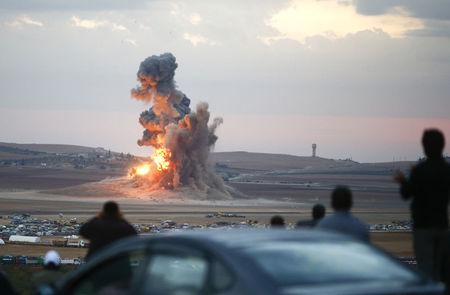 The United States and its allies staged 25 air strikes on Islamic State fighters in Iraq and Syria, focusing on the Syrian cities of Kobani and Hasakah.

We can do this all day. However, unless their is a full invasion and occupation using cheap oil to pay for the cost of their occupation, there really is no point. There are so many sides one cannot tell one guy from the next without a program. After all, they do not march in rows like British Redcoats it will never end and has deep roots in history. The world can send 10,000,000 men and still IED's and other problems would occur. And the happy people at first will soon turn on the ones that saved them. It's pointless unless all major power countries work together without hidden agendas. imagine, though it will never happen, if the Russians, Japanese, Americans, Brits, French, Germans, Aussies, and perhaps even China could work together to snuff this out and split up the territory and share the oil but use some profits to rebuild the nations. Fantasy land but it would work.

The Turks could take em all, but then the Kurds would turn their guns on the Turks. Iran might step in and seconds later the Saudi's and then you have the makings of a big blowout.

Heck we don't even have translators we could trust and don't forget all the Islamic immigrants all of us have allowed inside. That would have to be dealt with first along with illegal Mexicans and all the Persians and Arabs in the EU. Not pretty.