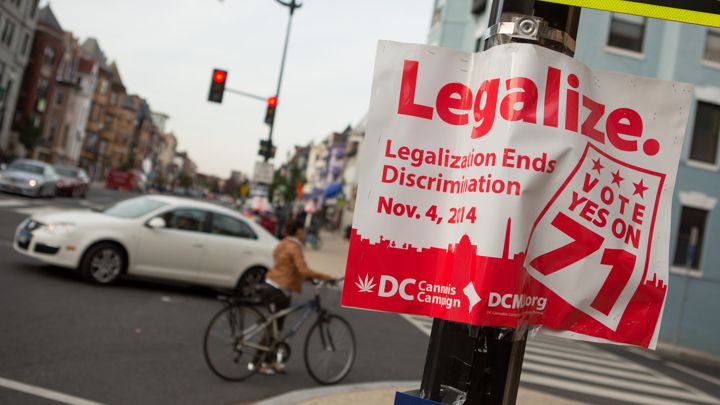 Politicians spar over the definition and intention of an "enact" that was put in a Congressional provision meant to stop legalized weed in D.C.

The fate of legalized marijuana in Washington, D.C. will come down to a single word: "Enact." Last Election Day, voters opted to fully decriminalize weed in the nation's capital, joining Colorado, Washington, Alaska and Oregon.

They should Legalize Pot, but If you SMOKE IT, you should be arrested for endangering the overall Health, Safety and Well-Being of Other Persons... And If have kids and smoke ANYTHING around them, they should just take those kids away from you, 'cause you are causing harm to the kids and are just plain too stupid to raise any kids. Even if they Legalize it, what good does it do, because most jobs that I am aware of, require a mandatory Drug test in order to work?! I do not even smoke Tobacco Cigarettes, but I would not be allowed to keep my job IF I did... Duh?!

Do you know who is lobbying against legalization? Drug dealers because it would severely cut into their business. Congrats congress, you're on the same side as the drug dealers

It'll be amusing and fairly appropriate that wording and technicalities like may allow DC to go through with legalizing pot.

On the other hand, this kind of exact word vs underlying meaning of the law goes directly to what SCOTUS will be ruling on regarding Obama Care in the coming months.