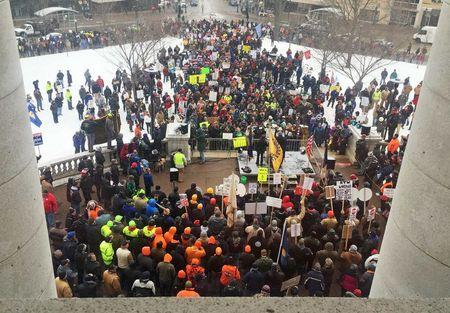 The Wisconsin Senate narrowly approved a "right-to-work" bill on Wednesday that would bar private-sector employees who work under union-negotiated contracts from being required to join their unions or pay them dues.

Remember this: I got mine, now you all get yours...hahaha. There will be nothing in the pot for you smarty pants...you'll work for 10 years of so, get fired and won't find another job, because you'll be to old when the younger generations will push you out of the job pool...you'll have little or no SS, no pension, unless you join the Army or Marines for 20 or more years...suckers, economic slaves...hehehe.
The new world order will fix you all...I was a marine, and served my country for 6 years, worked government jobs later, and was in several unions, yes they are thieves, but I managed something after working, I said working, I fracking worked...not take handouts like most of the looser here. I earned my way, did you, did you serve your country???