Churchill: The blood sweat and tears behind his finest hour speech 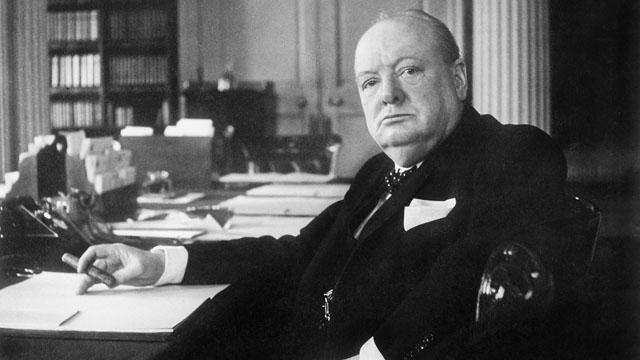 Sir Winston Churchill was a British prime minister and statesman who led the country to victory against Nazi Germany and the Axis powers in World War Two.

Winston Churchill had been prime minister for five weeks when, 70 years ago tomorrow, he ordered a nation winded from Dunkirk to hold its nerve as France collapsed and the Luftwaffe prepared to invade the skies of southern England.

The speech he delivered on 18 June 1940 did not disappoint. "The Battle of Britain is about to begin. Upon this battle depends the survival of Christian civilisation," he warned. "Let us therefore brace ourselves to our duty and so bear ourselves that, if the British empire and its Commonwealth last for a thousand years, men will still say: 'This was their finest hour'."

Impressive as the address was, its genesis was not an easy one. An examination of the speech held at Cambridge University's Churchill Archives Centre reveals that he drafted and redrafted the speech until he felt his words did justice to the situation.

The archive's director, Allen Packwood, noticed the revisions as he and the historian Max Arthur re-examined the material before the 70th anniversary of the Battle of Britain. Even the first draft, said Packwood, offers evidence of frantic editing.

"The page is covered with his handwritten annotations in red and blue ink," he said. "It highlights how much care and attention Churchill put into this speech. He knew how much was riding on this. The country was facing a huge national crisis. France had capitulated and Britain was facing the prospect of invasion."

A glance through the final notes that Churchill made for the speech to parliament also revealed that the new prime ministerChurchill was chopping, changing and forging phrases until the last moment before he made the speech to in parliament. "You can imagine him sitting on the front bench of the Commons spotting an error and making a quick change," said Packwood.

"Perhaps the best example of this is on the penultimate page. He says 'The battle of France is over. The battle of Britain is about to begin', and just before that phrase he's added in his own red pen, at the last moment, 'all shall be restored'."

By tracing the speech's evolution, said Packwood, one could catch a glimpse of the workings of a great rhetorical mind.

"The final note is set out in a blank verse format, set out like the Book of Psalms. It looks like poetry, it brings it to life, it gives him, I think, the rhythm, it enables that great Churchill oratory. Nowhere is that more evident than in the final page."

The records also show that not everyone was consistently dazzled by his oratorical abilities. The prime minister's private secretary, Sir Jock Colville, noted in his diary that Churchill had not spoken as well on 18 June as he had in the past and had referred to his notes more often.

"Colville said that it was too long and that Churchill sounded tired," said Packwood. "Well, fortunately, most of the nation didn't agree. Only someone that close to Churchill would have been that critical about the speech."

Someone even closer than Colville also noticed the strain the prime minister was under. In the days after France fell, Churchill's wife, Clementine, issued a spousal plea to improve his behaviour.

"My darling, I hope you will forgive me if I tell you something I feel you ought to know," she wrote. "One of the men in your entourage, a devoted friend, has told me there is a danger of your being generally disliked by your colleagues and subordinates because of your rough, sarcastic and overbearing manner. My darling Winston, I must confess I have noticed a deterioration in your manner and you are not so kind as you used to be."

However, Packwood said, it is no bad thing that the documents paint a less than hagiographic portrait of Churchill.

"I think there is a big danger of Churchill assuming a purely iconic status," he said. "The archives reveal all the aspects of his character. What you can see here is his self-belief, his determination, his humanity, that leads us on to final victory."